Rye is especially popular as a food source in northern and eastern Europe, and in parts of Russia. One of the most common uses is to turn rye into rye bread. 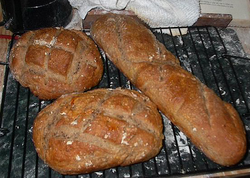 The gluten in rye will not leaven bread, so rye bread tends to require the addition of some wheat to ensure that the bread is leavened.

As well as the whole berries of rye, rye can be found in flour and flake form. The flour is used for baking, while the flakes can be used as part of a breakfast meal.

For cooking purposes, one cup of rye flour is the equivalent of one cup of wheat flour. This means that you can substitute rye flour for almost any recipe using wheat flour, remembering that the taste of rye is very distinctive and it will darken the resulting baked good.