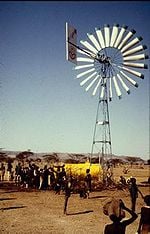 Windpumps. Windpower technology dates back many centuries. There are historical claims that wind machines which harness the power of the wind date back to the time of the ancient Egyptians. In Europe the first windmills were seen much later, probably having been introduced by the English on their return from the crusades in the middle east or possibly transferred to Southern Europe by the Muslims after their conquest of the Iberian Peninsula.

The first half of the 20th saw further development, particularly a move toward propeller type wind machines for electricity production. By the 1920's 6 million windpumps were being used in the USA alone and their manufacture and use had become commonplace on every continent.But the glory of the windpump was short-lived. With the advent of cheap fossil fuels in the 1950's and 1960's and the development of pumping technology the windpump became almost obsolete in the USA.

There are manufacturers in several developing countries now producing windpumps. The uptake of wind machines for water pumping, however, has been generally very slow even though the technology is well suited to the demand of many regions of Africa, Asia and Latin America. Where they are used, the demand is for one of the following end uses: village water supplies, irrigation and livestock water supplies. Water pumping is one of the most basic and widespread energy needs in rural areas of the world. It has been estimated that half the world's rural population does not have access to clean water supplies.