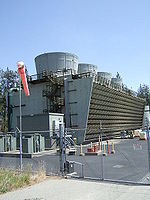 Geothermal power is generated from the high temperatures that can be found in various parts of the earth's crust such as volcanoes, hot springs, and geysers. The water that surrounds and fills the gaps between the rocks in the crust is raised in temperature by these natural processes. This hot water is then pumped to the surface and its steam is captured and used to create electrical power through a turbine system.

Dry stream geothermal plants use natural steam directly from the Earth. Once the steam pocket is tapped, the steam is channeled directly into a turbine which converts the thermal energy into electrical power.

Flash stream power hot water is pumped up to the surface of the earth, where its pressure is lessened and it is separated into steam and cool water. The steam is then collected and sent to a turbine to generate electrical power, while the cooled water is pumped back down to the geothermal area in the crust to continue in the cycle.

Power from the geothermal binary cycle is generated when water with a small amount of heat is pumped from the source to a heat exchanger to vaporize a secondary liquid with a much lower boiling temperature than water. That vapor is sent to the turbine to generate electrical power. The water returns to the source to complete the cycle again.