Nelson Cecarelli of Northford, Conn., who often lost an entire season’s cucumber crop to voracious cucumber beetles, planted squash around his field perimeter, sprayed minimally, and harvested a bounty of cukes in 2003 and 2004. Cecarelli was one of about 30 farmers in New England to adopt a perimeter trap cropping strategy recommended by a University of Connecticut researcher who, with a SARE grant, tested the theory over two seasons— with terrific results. The system, popular among growers, encircles a vulnerable vegetable with a crop that can attract and better withstand pest pressure, reducing the need for pesticides. 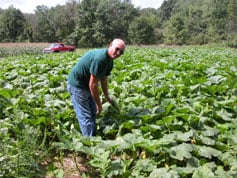 Randy Blackmer examines pumpkins planted as a “trap” crop to draw insect pests away from cucumbers and summer and winter squash on his North Grosvenor Dale, Conn., farm.
Photo by T. Jude Boucher.

“What you’re seeking in a trap crop is something that gets up and out of the ground fast with lots of foliage and won’t be over-run easily when beetles come into the field,” said T. Jude Boucher, Extension Educator and project leader, who recommends a thick-skinned squash called Blue Hubbard. “If we can stop beetles during the seedling stage, we can eliminate most of the damage.”

In 2004, nine New England growers increased yields of crops like cucumbers and summer squash by 18 percent and reduced insecticide use by 96 percent, earning an extra $11,000 each, on average, Boucher said. The research compared a dozen farms using perimeter trap cropping to farms that used typical spray regimens.

Growers planting perimeters applauded the time savings in pest scouting and pesticide spraying—just patrolling and minimally spraying the perimeter —and the improved economics thanks to lower input costs and higher, better-quality yields. Previously, growers had applied up to four sprays per field.

Despite pessimism that the Blue Hubbard squash wouldn’t appeal to customers, most participating farmers found that Blue Hubbard resisted beetle damage and sold at their markets. In post-project surveys, farmers said the system not only saved money, but also that planting a perimeter was simpler than applying multiple full-field insecticide sprays.

“We’re trying to get away from the ‘silver bullet’ mentality that you can put on a pesticide and it’ll stop your problem,” Boucher said. “We’re changing the pest populations’ dynamics in the field.”

For more information about this project, go to http://www.sare.org/projects and search for LNE03-177.