Living with the Soil/9

So why has soil degradation reached the scale it has today, given that indigenous measures hold so much promise? Is this due to the rapid change in social and macroeconomic frameworks? The fact of the matter is that the population is growing quickly, markets and social conditions are changing rapidly, and information flows and modern technologies are also influencing the rural population. Increasingly, the prerequisites for traditional soil management methods are not in place: Longer fallow periods presuppose a greater availability of land, and therefore can no longer be accommodated. Children attending school and the migration of young men reduce the pool of available labour.

So what can be done to protect soils against degradation, and utilise them more productively and sustainably? A large number of tried and tested cropping and protection measures are available, and are being used in development cooperation projects. Yet they are only sustainably effective if accompanied by supplementary measures and tailored to local needs.

In other words, the answer cannot be solved by farmers alone. A large number of extraneous factors influence farm management decisions, including the availability of labour, marketing potentials, prices and land laws. 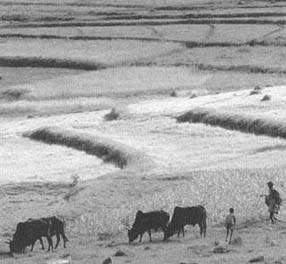 Traditionally, hillside terraces have been built in several densely-populated mountainous countries of Africa, Asia and Latin America. In the course of social change, however, these terraces have fallen increasingly into a state of neglect. They can reduce erosion effectively. In areas of low precipitation, they also retain scarce rainwater (allowing water harvesting). Building terraces is labour-intensive, however, and requires heavy investment. The terraces also need to be constantly maintained, and land is lost. Unless accompanied by soil amelioration measures, terracing generates barely any increase in yields. Its acceptance is therefore usually low. 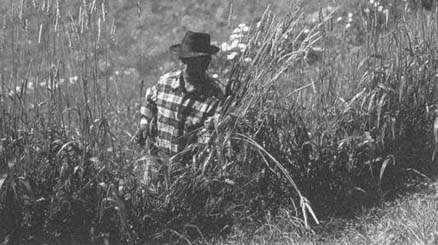 This method has been developed in several Andean countries. If grass strips perpendicular to the slope are left in place when ploughing, the earth carried away by rainfall is accumulated. In the course of time this results in terrace formation, which effectively prevents further erosion. This method does not require any additional labour, and the amount of land lost remains small. The grass on the strips can also be harvested. Acceptance is therefore usually high. 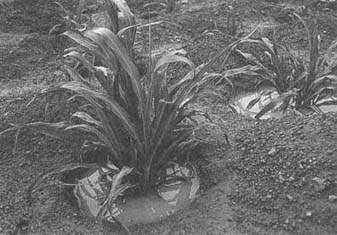 Tassa or Zaï¿½, a traditional method in the Sahel region, are planting holes designed to suit conditions in dry zones. Rainwater is collected in them, enabling crops to survive prolonged dry periods. The application of organic fertilisers or covering with mulch matter improves water storage, and reduces losses. Using this method, even stony areas with little soil can be utilised for agriculture. Despite the high labour requirement, this method is still being employed, and has even been further disseminated within the scope of development projects. 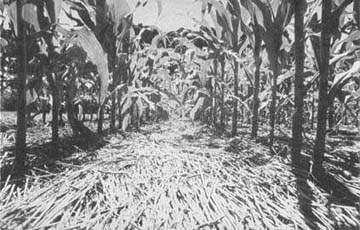 Traditionally, this method has been applied in slash-and-burn agriculture. After burning, the soil is loose and weed-free, allowing direct planting. In permanent agriculture, the fallow is replaced by green manure, and the soil permanently covered with plant remains and harvest residues. The seed is sown directly through the cover into the soil, using special implements. Direct planting protects the soil effectively against erosion, reduces evaporation and promotes soil life. In Latin America, direct planting has been rapidly disseminated in recent years. 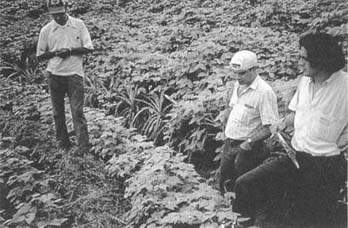 Many small farms in Central America apply this method. The soil is turned only in small strips. The existing vegetation between the strips remains in place. Other measures applied in addition are crop rotation with leguminous crops, as well as compost and fertiliser application, and ground-covering with mulch. This prevents soil degradation, and promotes productivity. However, labranza mï¿½nima requires sufficient land for the vegetation strips. A great deal of manual labour is also required. The method is therefore appropriate primarily for intensively managed small farms with high income at sloping sites.