International Day for the Eradication of Poverty 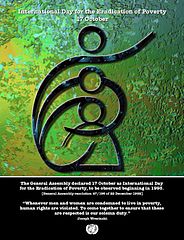 The International Day for the Eradication of Poverty is an international observance celebrated every year on October 17 throughout the world. The first commemoration of the event took place in Paris, France, in 1987 when 100,000 people gathered on the Human Rights and Liberties Plaza at the Trocadéro to honour victims of poverty, hunger, violence and fear at the unveiling of a commemorative stone by Father Joseph Wresinski, founder of the International Movement ATD Fourth World. In 1992, four years after Wresinski's death, the United Nations officially designated October 17 as The International Day for the Eradication of Poverty. Participation by the poorest of people is an important aspect of the observance of the Day.

Wherever men and women are condemned to live in extreme poverty, human rights are violated. To come together to ensure that these rights be respected is our solemn duty. — Joseph Wresinski, Text Engraved on Original Commemorative Stone in Paris W

2019: “Acting together to empower children, their families and communities to end poverty” [1]