How to make and use a sawdust toilet

My version of a "sawdust toilet" (as described in the Humanure Handbook) consists of a receptacle bucket, a removable toilet seat that slips into the top, and a bucket of sawdust for covering after each use. When the toilet is full the seat is switched to the empty sawdust bucket. The toilet is emptied, cleaned and sanitized and then becomes the sawdust bucket after filling with clean sawdust. The whole toilet system, including outdoor compost chamber, can be constructed for less than $10. This simple, inexpensive, and hygienic toilet -- affordable to construct and maintain by just about anyone on the planet -- is a perfect example of an appropriate and sustainable technology. 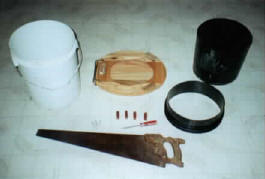 The tools and materials

You will also need a compost chamber; mine is constructed from recycled wooden pallets held together by wire at the corners.

The seat with flange attached

How it goes together

Emptying into the composting chamber

This simple composting toilet system is inexpensive both in construction and to operate and, when properly maintained, aesthetic and hygienic. By closing the human nutrient cycle, it is a perfect compliment to organic gardening. In many ways it out-performs complicated systems costing hundreds of times as much! Although it may lack appeal in first world countries with their expensive, "out of sight, out of mind" sewage systems, it may be highly appropriate in areas that lack such complex infrastructure. However, there seems to be an explosion of interest in sustainability, and many more citizens are coming to feel that Composting Toilets are the Only Way to Go!

We recently tested a simple ventilation system to capture odors during use and vent them outdoors. This common-sense, basic capability is something lacking in almost all toilets, even in the wealthy industrialized countries. The American approach is to ventilate the toilet room by a fan installed in the ceiling. This makes some sense, as this approach will also ventilate a shower or bath. However, a much more effective approach, which prevents any odors from even escaping from the toilet, is to ventilate the toilet itself. You can achieve this by attaching a flexible air suction hose to the toilet flange powered by an electric fan which sucks air from the room and vents it either into the normal ventilation stack or through the wall to the outside.

Our simple contraption consists of a second hand vacuum cleaner, a 2" check valve to prevent odors or outside air from flowing backwards into the room, a dimmer switch to lower the power (and therefore noise) of the vacuum, and a few pieces of 2" or 3" pipe to route the air flow. Total cost is less than $35 (vacuum: free, check valve: $17, other plumbing parts for routing air: about $5, dimmer switch and other electric parts: $10). The fan device is actuated for only a few seconds during use, until new deposits are covered when no further odors are present. This method works flawlessly and prevents all odors, all the time. For those who don't want to re-invent the wheel, I have come across a commercial version of a toilet ventilation fan, although I cannot vouch for whether it works well. Basically, it appears to be a thin device that fits between the usual toilet seat and the porcelain fixture. It ventilates air in its proximity with an electric fan. The following simple diagram shows the basic plan for this toilet (not including the ventilation device). The air suction device (connection by some type of flexible hose) attaches to anywhere on the flange.