From Appropedia
Jump to navigation Jump to search
Device
Hot 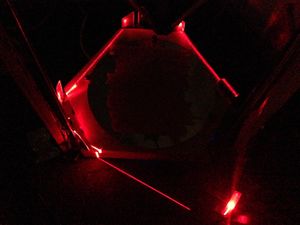 Construction of a laser trip-wire to shut off a Delta printer (specifically MOST delta RepRap ) in the event of a detached hotend nozzle or rod which may happen as a result of :

ATENTION: You cannot use this method if you have taken up the BTemp digital pin on the Melzi board. This will not be an issue unless you have installed a heated print bed)

This design requires the newest version of the Franklin firmware (as of Dec. 9, 2015). 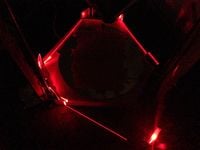 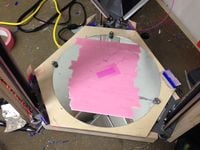 Upgrade your Delta RepRap printer with the current version of the Franklin firmware (see MOST delta RepRap for details Franklin install). 3D print all needed parts.

Insert a mirror mount into each hole

Place your laser light source on a raised platform so that it can hit your first mirror.

Adjust all mirrors accordingly to angle the beam around the print bed (this is much easier to do in the dark).

Once you have aligned the last mirror to where you want the laser light to end at, mark that section on your printer.

Insert the photo resistor into the housing (making sure the leads come out the back two holes.

run the wires into the spare digital pin (BTemp) on the Melzi board (cannot use this pin if you have installed a heated print bed).

Power on printer and go to set the following parameters / pins:

There should be a new box named Sensor (or whatever name you gave it) above the Feedrate. It should be checked when no light is hitting the resistor, unchecked when light hits it.

Save settings and happy printing

Testing stability of lasers and mirrors while 3d printing]