From Appropedia
Redirected from Fish 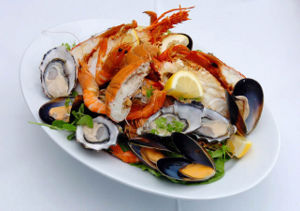 Almost all grocery stores have a fish and seafood section. Salmon, shrimp, catfish, and scallops are just a few of the common items one can purchase. You may have noticed that some of these items are marked with a label of “Farmed” or “Wild.” A farmed label indicates that the seafood has been raised and produced in some type of manmade enclosure, either in a natural body of water, or a built facility. Some of the most common farmed fish are salmon, catfish, tilapia, and shrimp. A wild label indicates that the seafood has been caught from its natural habitat. There are complex differences between these two methods of fishing, which are described below.

Both methods of fishing require that the fish be transported to its final destination. This involves shipping and/or trucks. They can consume large quantities of fossil fuels, depending on how far the fish must travel before it reaches its final destination. Final destinations include processing facilities, grocery stores, and restaurants. With wild caught fish, most of the energy that is used (other than shipping) powers boats to capture the fish. Other energy inputs go into making nets, traps, bait, and gear. With farmed fish things are a bit more complicated. Fish farming requires that the fish be raised and cared for until they are ready to be harvested. Whether their enclosure is in a natural body of water or a facility, the fish require clean water and sufficient levels of oxygen. Because of these requirements, large water purification and oxygenation systems may be integrated into the fish farm. In addition, feed must be provided for the fish. Feed can be made from a number of ingredients such as ground up mackerel and anchovies, or vegetable substances such as corn. This feed must itself be harvested and processed before it is fed to the fish (World Wide Fund for Nature, 2008).

Many of the world’s fisheries have been severely deleted or are already at maximum output yield (Hackett, 2006). Wild fish that are caught exacerbate this problem. And, as world wide fish demand increases, some species are brought closer to extinction and ocean and river food chains are disrupted. In theory, farming fish would help to alleviate this problem and not take away from wild fish populations. In some cases farmed fishing does do this, but in others it ends up doing more harm than good. “The severity of these impacts depends upon the species being farmed” as well as the location of the farmed fishery (World Wide Fund for Nature, 2008). For example, farmed seafood such as oysters, clams, and mussels can have less of an environmental impact. Because they are filter feeders, they help to clean the waters they inhabit more than they pollute them (Monterey Bay Aquarium, 2008). Some farmed freshwater fish such as tilapia, catfish, and trout can also have less of an impact on the environment (Monterey Bay Aquarium, 2008).

However, there are many negative impacts that can occur with farmed fishing. For example, because farmed fish are kept in enclosures, they are often packed in at very high densities. Because of this, many famed fish are prone to diseases and parasites. If these enclosures are kept in a natural body of water, it is also possible for these diseases to spread to wild fish populations. Also, because of their high densities, fecal matter is also concentrated. This further pollutes the surrounding environment. In addition, farmed fish are an invasive threat. If these fish escape their enclosures they can out compete the wild fish and plant life and further marginalize them, possibly leading to their extinction (Roberge, 2008). Notably, shrimp farming is particularly devastating to mangroves. Around 35% of the world’s mangroves have been destroyed, with shrimp farming as a major cause (Shrimp Farm, 2008).

Both wild and farmed fish pose the risk of containing high levels of mercury, PCB’s and pesticides. In general, farmed fish have higher levels of these contaminates than wild fish (Edwards, 2004). Eating such fish, even in small quantities, can have negative consequences for physical, mental, and reproductive health. This is especially true for women and children (Environmental Defense Fund, 2008). However, a potential benefit from eating both wild and farmed fish comes from their high levels of omega-3 fatty acids and lean fat content. Comparably, wild fish have higher levels of omega-3 fatty acid and a lower fat content than farmed fish. This is due to the fact that farmed fish are not able to swim or use their muscles naturally (Environmental Defense Fund, 2008). Another health concern about eating farmed fish is that their diet is unhealthy. Take as an example farmed salmon. In the wild, salmon are carnivorous. However, as farmed salmon, they are often fed a corn meal or other vegetable-derived diet that is dyed red. This red dye is to ensure that their flesh will be the reddish-pink color that wild salmon get from their natural diet (Joyce, 2003).

Aside from ethical concerns about eating animal protein, there are other considerations in the wild vs. farmed debate. For one, because many fisheries are severely depleted, buying fish from these fisheries may be helping to exacerbate this problem and push certain species closer to extinction (Hackett, 2006). Because some many of these fisheries are being depleted, “Other marine species are also being left with few fish to eat, including seals, sea otters, seabirds, whales, and dolphins. Humpback whales in Canada's Bay of Fundy, for example, appear to be suffering from lack of food due to competition with fishing fleets for herring” (World Wide Fund for Nature, 2008). Another concern is that while wild caught fish lead natural lives, the live of farmed fish are drastically different. Because farmed fish are kept in high concentrations and are packed tightly into their enclosures, they often are not able to swim or move naturally and their fins can become deformed (Wild versus Farm, 2008). They are also prone to infection and diseases at higher levels than wild fish.

To learn more about farmed vs. wild fish visit: <http://www.mbayaq.org/cr/seafoodwatch.asp> This is a resource that may help one to decide whether to purchase wild fish or famed fish.

Page data
Retrieved from "https://www.appropedia.org/w/index.php?title=Seafood&oldid=625041"
Cookies help us deliver our services. By using our services, you agree to our use of cookies.
Categories:
Maintenance categories:
Comments
Privacy policy · About Appropedia · Disclaimers · Mobile view · Content is available under CC-BY-SA-4.0 unless otherwise noted.
</html