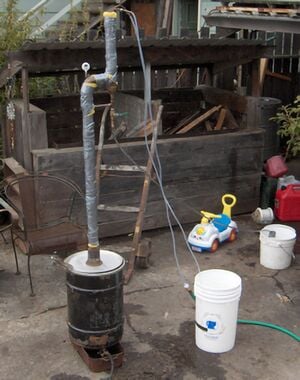 Ethanol is a grain alcohol that can be used as fuel in most four cycle spark ignition engines. The process of making ethanol begins by extracting the sugars from a sugar crop such as sugar beets, or converting the starches of crops such as corn or potatoes to sugars. Crops used for ethanol production are titled "feed stocks". Starch and sugar crops both have their benefits depending on the region that they are produced in. The benefit of sugar crops is that they require less energy input since no starches need to be converted. The benefit of corn is that it can store much longer than sugar beets before rotting. I am using sugar beets since they were the most appropriate crop for the season and region. The sugars are extracted by juicing the beets and boiling with water. Now the solution is called "mash" and it can be fermented and then distilled to extract the ethanol. Ethanol fuel can be used in most converted engines if it has a alcohol percentage greater than 80%. Due to ethanols strong ability to bind with water, no still canremove the last 5% of water. Therefore the highest possible yield from a still is 95% ethanol. If blending ethanol with gasoline, all the water must removed to prevent separation of the gasoline and ethanol.

I began by washing the beets and then slicing them up so they would fit in the juicer. I juiced 18lbs of beets which yielded 1.4gal of juice and 7.5lbs of pulp. I then added 2gal of water and mixed juice and pulp together for a total volume of 5gal.

Heated mash to 189F and held temp for 20min to kill bacteria. Total heating process took 45min. I let the mash cool to 80F and then added 100g of Turbo Yeast that was purchased online. Turbo yeast is a special strain of yeast that is claimed to produce up to 14%alc in 48hrs. When fermenting mash it is important to achieve the highest alc% possible so more alc can be collected once distilled. Once yeast was added I agitated the solution for 20min to increase yeast activation then placed on lid and air lock. I let the mash ferment for 72hrs hoping to get all sugars converted to alcohol. I was unable to determine the final alc% of my mash because the solution was too thick for an accurate hydrometer reading. 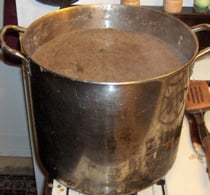 The whole operation in action

Total amount of distillate collected was 22oz of 80%alc. This amount became 18oz of 100% ethanol once dehydrated.Sugar beets have a sugar content around 20%, so the theoretical yield of ethanol produced is around 50%alc per weight of sugar. So one 1lb of beets with.2lb sugar should yield.1lb of ethanol. Ethanol weighs 6.5lbs/gal. So theoretically 65lb of sugar beets would yield 1gal of ethanol.

My results were that 18lbs of sugar beets yielded 18oz of ethanol. At this rate of yield it would take 128lbs to make one gallon of ethanol. My process was 50.8% efficient when compared to theoretical max yield.

The sugar mash began by boiling 4gal of water which took 62min. 25lb of conventional table sugar was added to the boiling water and the pH was lowered to 4.0. More water was added to make a final volume of 12gal. The hydrometer reading showed a Specific Gravity of 1.095 which correlates to 24% sugar and 13%alc potential. 150g of Turbo Yeast was mixed in and the wash fermented for 5 days.

After five days of fermenting, a final hydrometer reading showed that there was 1.5%alc potential left in the fermenter and that the wash was 12 gallons of 11.5%alc. 11.5% of 12gal is a theoretical maximum of 1.38gal of 100% alcohol to be distilled. 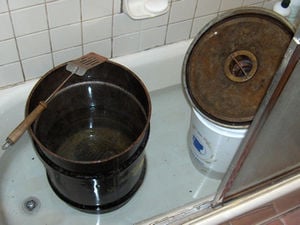 Cooling the wash in my laboratory. 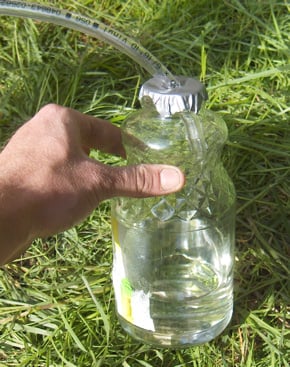 Ethanol being collected from the sugar mash distillation.

Therefore it took 242,740btu of propane to yield 98,410btu of ethanol. The efficiency of ethanol produced in distillation per unit of propane used is 40.5%.

My results show that distilling with propane consumes more energy than energy stored in the ethanol produced.From this experiment, making.14gal of ethanol required 18lb of sugar beets purchased for $1.00/lb ($18.00). The mash was heated on two natural gas burners for 45min. The amount of energy used in this process is undetermined and will not be included. 100g of Turbo Yeast used cost ($4.16). The distillation process consumed 2.12gal of propane purchased for $3.00/gal ($6.36). Total cost of producing.14gal ethanol was $28.52. Therefore the cost of making ethanol from local organic sugar beets is $203.71/gal.

From this experiment, making 1.13gallons of ethanol required 21lb of conventional sugar purchased for $0.44/lb ($9.24). Also the wash was heated on two natural gas burners for 62min. The amount of energy consumed in this process is undetermined and will not be included in the cost of production. 150g of Turbo Yeast were used ($6.23). The distillation process consumed 2.65gal of propane purchased for $7.95. The total cost of making 1.13gal of ethanol from conventional sugar is $23.42, therefore, making one gallon of ethanol from conventional store-bought sugar costs $20.73.