Energy from the wind (original)

ENERGY FROM THE WIND

Windmills have been used for many centuries for pumping water and milling grain. The discovery of the internal combustion engine and the development of electrical grids caused many windmills to disappear in the early part of this century. However, in recent years there has been a revival of interest in wind energy and attempts are underway all over the world to introduce cost-effective wind energy conversion systems for this renewable and environmentally benign energy source.

In developing countries, wind power can play a useful role for water supply and irrigation (windpumps) and electrical generation (wind generators). These two variants of windmill technology are discussed in separate technical briefs. This brief gives a general overview of the resource and of the technology of extracting energy from the wind.

The power in the wind is proportional to the cube of wind velocity. The general formula for wind power is:

This means that the power density in the wind will range from 10W/m² at 2.5m/s (a light breeze) to 41,000W/m² at 40m/s (a hurricane). This variability of the wind power resource strongly influences virtually all aspects of wind energy conversion systems design, construction, siting, use and economy.

Unfortunately, the general availability and reliability of windspeed data is extremely poor in many regions of the world. Large areas of the world appear to have mean annual windspeeds below 3m/s, and are unsuitable for wind power systems, and almost equally large areas have windspeeds in the intermediate range (3-4.5m/s) where wind power may or may not be an attractive option. In addition, significant land areas have mean annual windspeeds exceeding 4.5m/s where wind power would most certainly be economically competitive.

There are two primary physical principles by which energy can be extracted from the wind; these are through the creation of either drag or lift force (or through a combination of the two). The difference between drag and lift is illustrated (see Figure 1) by the difference between using a spinaker sail, which fills like a parachute and pulls a sailing boat with the wind, and a bermuda rig, the familiar triangular sail which deflects with wind and allows a sailing boat to travel across the wind or slightly into the wind. Drag forces provide the most obvious means of propulsion, these being the forces felt by a person (or object) exposed to the wind. Lift forces are the most efficient means of propulsion but being more subtle than drag forces are not so well understood.

The basic features that characterise lift and drag are: 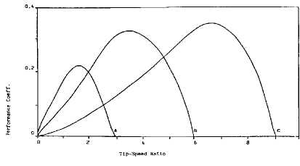 There are two main families of windmills: vertical axis machines and horizontal axis machines. These can in turn use either lift or drag forces to harness the wind. Of these types the horizontal axis lift device represents the vast majority of successful wind machines, either ancient or modern. In fact other than a few experimental machines virtually all windmills come under this category.

The proportion of the power in the wind that the rotor can extract is termed the coefficient of performance (or power coefficient or efficiency; symbol Cp) and its variation as a function of tip-speed ratio is commonly used to characterise different types of rotor. It is physically impossible to extract all the energy from the wind, without bringing the air behind the rotor to a standstill. Consequently there is a maximum value of Cp of 59.3% (known as the Betz limit), although in practice real wind rotors have maximum Cp values in the range of 25%-45%. 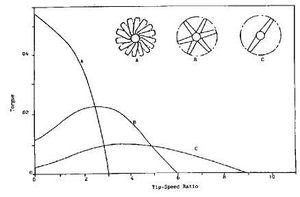 The choice of rotor is dictated largely by the characteristic of the load and hence of the end use. These aspects are discussed separately in the technical briefs on windpumps and windgenerators. Table 1 compares different rotor types.

Although the power available is proportional to the cube of windspeed, the power output has a lower order dependence on windspeed. This is because the overall efficiency of the windmill (the product of rotor CP, transmission efficiency and pump or generator efficiency) changes with windspeed. There are four important characteristic windspeeds:

Performance data for windmills can be misleading because they may refer to the peak efficiency (at design windspeed) or the peak power output (at the rated windspeed). The data could also refer to the average output over a time period (e.g. a day or a month).

Because the power output varies with windspeed, the average output over a time period is dependent in the local variation in windspeed from hour to hour. Hence to predict the output for a given windmill one needs to have output characteristics of the windmill and the windspeed distribution curve of the site (duration at various windspeeds). Multiplying the values of both graphs for each windspeed interval and adding all the products gives the total energy output of that windmill at that site.