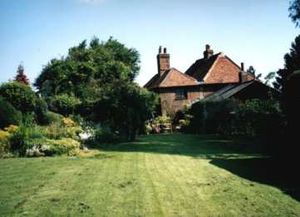 Dial House is a sixteenth-century farm cottage in the countryside surrounding Epping Forest in Essex, England. Since 1967 the place has been an anarchist-pacifist open house, the base of operations for a number of cultural, artistic and political projects ranging from avant-garde jazz events to helping to found the Free Festival movement.

Perhaps the best known manifestation of the public face of Dial House was the punk rock band Crass. Crass took literally the punk manifesto of 'anyone can do it', and combined the use of song, film, sound collage, graphics and subversion to launch a sustained and original critical broadside against all that they saw as a culture built on foundations of war, violence, religious hypocrisy and blind consumerism. 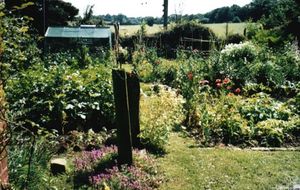 Crass all but retired from the public eye during the mid-1980s. Physically and mentally exhausted by the efforts thay had put into running the group, as well as what they describe as harassment by the forces of the state, the group retreated to Dial House to recuperate before facing more personal struggles, particularly against land owners and property developers seemingly intent on encroaching into the last remaining green belt areas surrounding London. Over a decade later, this culminated in co-founders Penny Rimbaud and Gee Vaucher buying the previously rented house at auction, a decision which left them £100,000 in debt, but at last securing a stable future for what they've now named a 'Centre For Dynamic Cultural Change'.

The summer of 2001 saw a gathering at Dial House for a "visioning event" for the future of the cottage. Dial House has been described as 'paradise', a retreat from corporate Western society. The garden is a maze of vegetable plots, native tree plantings, fruit bushes and flower beds teeming with humming bees and bird song, and a multitude of hidden shelters and sitting places adorned with sculptures and carvings. The building itself contains artists' studios, rehearsal rooms, libraries and social spaces. At the 2001 gathering many possibilities for the house were discussed, such as art venue, healing workshop space, jazz festivals, permaculture convergences, poets' retreat, fireworks parties, willow sculpture courses and more.