Diablo Canyon (Nuclear) Power Plant, located on the water's edge in San Luis Obispo County California, was originally designed to withstand a 6.75 magnitude earthquake from four faults, including the nearby San Andreas and Hosgri faults,[1] but was later upgraded to withstand a 7.5 magnitude quake.[2] It has redundant seismic monitoring and a safety system designed to shut it down promptly in the event of significant ground motion. 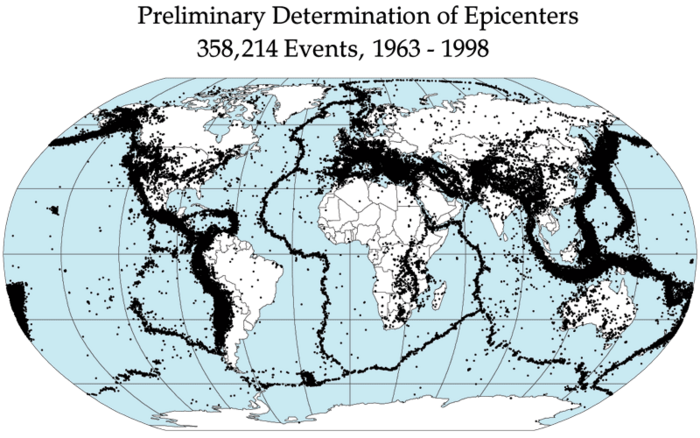 Diablo Canyon Power Plant (DCNPP/DCPP)is located proximal to the Los Osos, Hosgri, San Andreas and Shoreline faults. Many of these were discovered late in the process of design and construction, necessitating redesign. Construction errors compounded the delays and expense before the plant went online and began producing. Thereafter, discovery of the Shoreline fault caused a round of controversy leading Assemblyman Sam Blakeslee to introduce legislation mandating 3-D seismic studies. The Shoreline Fault is described in the November 2008 PG*E report as an "alignment of microseismicity subparallel to the coastline indicating the possible presence of a previously unidentified fault located about 1 km offshore of DCPP."[3] The plant is up for relicensing and, in the Fukushima aftermath, there is renewed opposition due in part to public perception that the risk of earthquake or tsunami make the plant unsafe. On the other hand, company officials contend that the plant is inherently safe from tsunami due its situation on an 85 foot coastal bluff. Re-licensing is contingent upon consistency with the Coastal Act and thus review by the California Coastal Commission, however seismic issues are more properly within the purview of the Nuclear Regulatory Commission. Much to the chagrin of some parties, such as U.S. Representative Ed Markey, the NRC in June 2011 announced that it had already completed its Safety Evaluation Report (SER) for the plant. [4][5]

Critics contend that the Diablo Canyon (Nuclear) Power Plant was built so close to a set of geological fault lines that it is for all practical purposes to be regarded as built "directly over" an earthquake fault. [6][7]This is the Hosgri fault which was discovered while the plant was under construction, and led to massive redesign. More recently, the Shoreline fault was discovered, a few hundred meters offshore, sparking renewed interest in the controversy.Template:Citation needed

An earthquake (also known as a quake, tremor or temblor) is the result of a sudden release of energy in the Earth's crust that creates seismic waves. The seismicity or seismic activity of an area refers to the frequency, type and size of earthquakes experienced over a period of time. The largest earthquakes in historic times have been of magnitude slightly over 9, although there is no limit to the possible magnitude. The most recent large earthquake of magnitude 9.0 or larger was a 9.0 magnitude earthquake in Japan in 2011 (as of March 2011), and it was the largest Japanese earthquake since records began. At the Earth's surface, earthquakes manifest themselves by shaking and sometimes displacement of the ground. When the epicenter of a large earthquake is located offshore, the seabed may be displaced sufficiently to cause a tsunami. Earthquakes can also trigger landslides, and occasionally volcanic activity.

From a more scientific perspective, the geology is as follows:" Three Pliocene-Miocene marine sedimentary units dominate the geology of Diablo Canyon: the Pismo Formation, the Monterey Formation, and the Obispo Formation. According to a Lawrence-Berkely report entitled Geologic Investigation of a Potential Site for a Next-Generation Reactor Neutrino Oscillation Experiment – Diablo Canyon, San Luis Obispo County, CA [8]the area is tectonically active, located east of the active Hosgri Fault and in the southern limb of the northwest trending Pismo Syncline." The Obispo Formation is made up of marine and volcaniclastic sedimentary rocks. [9] [10][11][12][13][14] In 1985, the USGS of the Department of Interior published a report[15] by Kenneth Campbell, at that point in the history of earthquake science probably a "deterministic study", entitled "Empirical prediction of near-source ground motion for the Diablo Canyon power plant site, San Luis Obispo County, California".[16] More recent studies include probabilitist [17]seismic hazard assessment. [18]

Various techniques are used to identify faults. These include:

The Shoreline Fault is a 25 km long vertical strike-slip fault[22] discovered in 2008 that lies approximately three hundred meters from the Diablo Canyon Nuclear Power Plant in California. According to Pacific Gas and Electric, the fault may produce quakes up to 6.5 magnitude. Pacific Gas and Electric asserts that the facility is able to withstand a 7.5 magnitude quake.[23] However, mandated three dimensional seismic studies have not been yet completed and will more fully indicate whether the faults are connected or not. Template:Citation needed

The Nuclear Regulatory Commission's estimate of the risk each year of an earthquake intense enough to cause core damage to the reactor at Diablo Canyon was 1 in 23,810, according to an NRC study published in August 2010.[29][30] At a community forum in San Luis Obispo, NRC, PG&E and academic experts presented information on seismic risks to the general public. This included a review of both older deterministic and more contemporary probablistic studies. [31]

The Office of Nuclear Reactor Regulation of the Nuclear Regulatory Commission provides oversight of Incident response teams and assures provision of an appropriate Incident commander for all adverse events including Earthquake. The company does have in place the following measures:

According to information provided by the plant operator Pacific Gas and Electric [32][33] the plant is designed to accommodate a ground acceleration of 0.75 g - three quarters of gravity. By comparison, the ground tremors experienced by the Fukushima Daiichi power plant was reported as 0.2-0.51 g. The design basis of Fukushima Daiichi is licensed as 0.18-0.36.

Tsunami may result from earthquakes particularly those originating in offshore submarine landslides and tremors, but PG&E sources emphasize that the geologic conditions proximal to DCPP are not conducive to signifigant tsunami generation.Template:Citation needed The plant is located on an eighty five foot coastal bluff[34] and the maximum anticipated tsunami is far less.Template:Citation needed

In April 2011, in the wake of the Fukushima nuclear incident in Japan, PG&E asked the NRC not to issue license renewals until PG&E can complete new seismic studies, which are expected to take at least three years.[37][38] The ongoing (as of 6/2011) seismic studies were recommended by the California Energy Commission and are approved and funded by the California Public Utilities Commission. [39] Community based organizations and activists contend that the plant is inherently unsafe due to the earthquake faults, the lack of knowledge about them, and a putatively inadequate track record of government and private industry in the anticipation and control of such hazards. [40] [41][42] Due to seismic and other concerns, many of these individuals and CBO's demand that DCPP be decommissioned. [43]

The seismic studies imposed by government add to the cost and perhaps eventually the delays experienced by the plant operator. The nuclear industry inherently requires long range planning for capital formation, licensing and waste disposal and these factors have been identified as problematicizing the industry, leading to its collapse.. [44] In Collapse of an Industry,: Nuclear Power and the Contradictions of U.S.Policy, John L. Campbell contrasts how regulatory mechanisms in the US and Germany differ from France, which tends to exclude citizen participation in public policy. Sweden, according to Campbell, occupies something of a middle ground, with extensive citizen input in the policy formation phase, unlike the US and Germany wherein citizen input tends to be at the implementation level, or France, where there is virtually no citizen participation. [45] given the heightened awareness of the dangers of nuclear power plants situated on the coast and close to earthquake faults, many observers have speculated that the declining public confidence in nuclear energy may lead to emulation of German scepticism of nuclear power plants. [46]