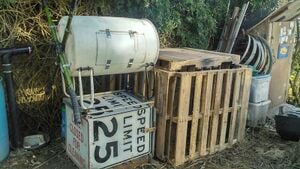 In today's world of American waste, it is more important than ever to re-use and re-purpose food scraps in a way that is environmentally conscientious and of use for enriching local soils. The Sanctuary, a community arts and learning non-profit in Arcata California, lives by the tenets of sustainability and ethical stewardship. Team Compost worked with members of the Sanctuary in the fall of 2016 to re-vitalize their composting facilities.

After a few months of use this design ended up failing in three critical areas. Please consider the following if you are thinking about building your own:

Team Compost was created in the Fall of 2016 at the Humboldt State University's Engineering 215 class. Our client for the ENGR 215 class was The Sanctuary, a creative space for artists and people from the Humboldt community to use tools, take music classes, participate in community events, or teach a skill. A primary interest of the Sanctuary crew was sustainable living and design, so much of their yard was devoted to gardening, building, or composting. Because their old compost system was a do-it-yourself mash-up of an old metal pipe and some trash cans, the process was fairly inefficient and had the added problem of infestation by rats.

Team Compost's objective was to improve the Sanctuary's compost system by making the design inviting, accessible and rat-proof. The previous compost system was composed of two metal trash cans that were leaking and wet, and a finishing bin that was an old metal rusty container with a non functional lid. The project aimed to upgrade the Sanctuary's old system into a functional composter that is easy to use, easy to maintain, aesthetically pleasing and easily accessible, for a price not to exceed $400. The final design was dubbed the "Three Stage Rotating System."

Team Compost used a set of weighted criteria to best fit the design process to the Sanctuary's needs. The new compost system had to satisfy all criteria in order to last for multiple years. See below for a table that organizes the weighted criteria. 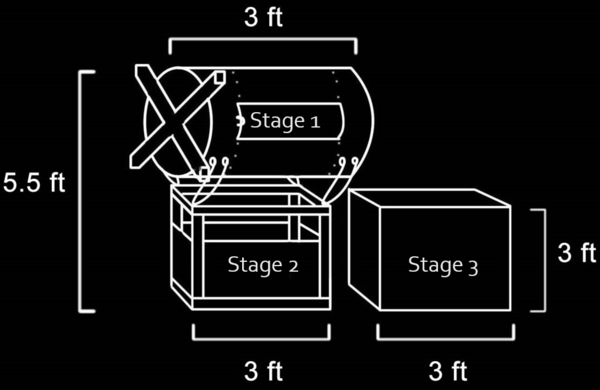 The final design met the criteria in a lasting, and effective way. Because the Sanctuary's old compost system was prone to rats, succumbing to the weather, and difficult to use, the new system had to be made of more durable materials while existing in a configuration that would repel pests. In response to these problems, the team formulated the, "Three Stage Rotating System." The rotator design solved two problems at once by elevating the freshest food-waste materials away from access by rats, and by allowing for easy turning and aeration of the compost. The rotating element was extremely important to the team and the client because stirring compost materials frequently can greatly aid in the efficiency of their break-down. Once material in the first stage was broken down enough it would finish in a secondary container, and be stored in a tertiary chamber.

The final configuration was comprised of a 55 gallon drum resting on rollers supported by bicycle forks inserted into a welded frame made of a galvanized steel street sign pole (see fig. 5 & 6). The frame served a dual function by supporting the street signs which made up the walls of the second stage bin. Additional signs were used for a sliding lid and a hinged front door secured with a wood latch (see fig. 7 & 8). Special care was taken in positioning stage two over a heavy wire mesh to prevent tunneling by rats. The final stage was constructed using old shipping palates which were scavenged from the backs of local grocery stores (see fig. 9). Pests were not expected to be an issue in stage three due to the fact that any material added from stage two was expected to be mostly broken down.

The table below lists materials used on the project and component costs.

In order to replicate the compost system that was built for the Sanctuary, follow the steps below. All steps have room for variation as scavenged materials may warrant different measurements than the ones used by Team Compost.

How to build an improved compost system.: 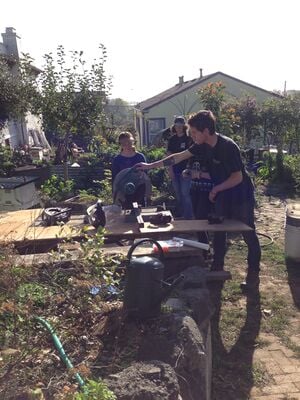 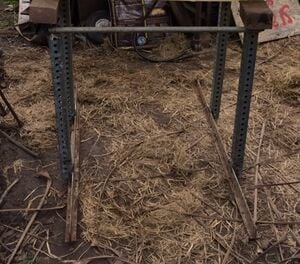 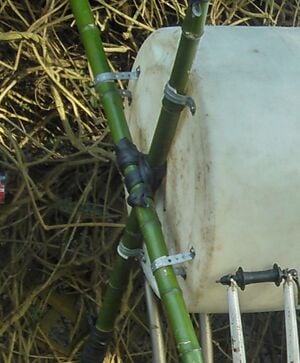 Caption
Drill holes in side of drum, use plumber's tape or brackets to attach bamboo poles using machine screws, nuts and washers.
7

Caption
Cut out door of desired dimensions in center of compost barrel, and re-attach in place using hinges.
8 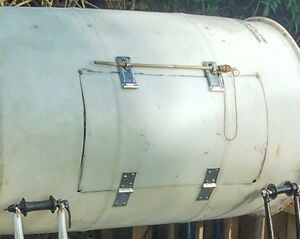 Caption
Attach two hasps to the front of the door and barrel to lock door shut when rotating.
9 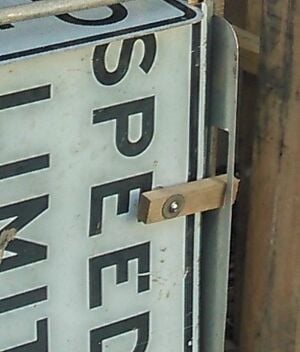 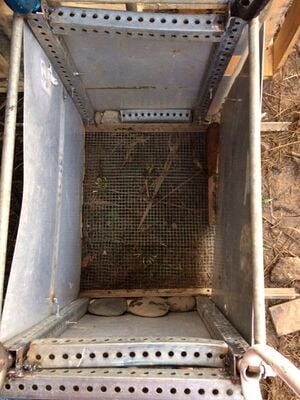 Caption
Lift system and place wire mesh beneath compost system. Place bricks and rocks on holes to secure mesh and keep rats out.

The ongoing cost of the system on the sanctuary is expected to be relatively low compared to the cost of implementation in hours and monetary cost. Most structural components are designed to minimize maintenance due to weather resistance. Parts that must be replaced due to weather corrosion are designed around materials that the sanctuary frequently acquires for free: bicycle wheel hubs used for rollers under the tumbler must be re-greased periodically, and wire mesh under the bins must be replaced every few years depending upon corrosion of wires. The hinge and hasp on the rotator door must be re-greased frequently, and in the event of rust must be replaced every 1-2 years to ensure structural strength. Tumbler support struts may need replacement as welded joints corrode.

The following guidelines should be followed to ensure proper functioning and longevity of the compost system.

Consult the following table if issues arise with the system. While non-comprehensive, these steps may help improve functionality.

Soon after completing work on the new system we transferred some of the Sanctuary's existing compost into the first stage tumbler. Initial load tests at 3/4 volume capacity were a resounding success. The door, the only sizeable weak point on the barrel, showed no signs of stress, and the roller supports turned smoothly and easily despite the significant weight in the tumbler. This page will be updated as the second and third stage are filled in the coming weeks.

We expect most of the structural elements of the system to hold up extremely well to the Humboldt weather. However, we expect the bamboo rod we used to hold the rotator's hasps closed and as the turning handles on the rotator to weather fairly quickly. Initially, bamboo was used because the client had a sizable stand of it growing in the yard, but in future projects an alternative may be considered for improved longevity. We suggest treatment of the current bamboo with a weather-resistant coating such as a lacquer or sealant.