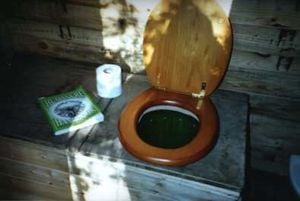 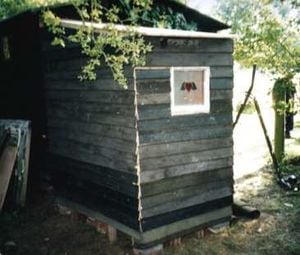 The same compost toilet viewed from outside. This structure was built entirely from recycled materials[2]

Composting toilets use biological processes to deal with the disposal and processing of human excrement into humanure.

There are two basic types of compost toilet, those that complete the composting process 'in situ' and those that are emptied to a separate compost pile remote from the toilet itself. The latter arrangement is sometimes referred to colloquially as a ‘bucket and chuck it’ system, like a Humanure Bucket System. This means that faeces is deposited into a plastic container to which soak material such as straw, sawdust, dry grass, etc, is added in order to absorb excess liquid, cover human waste materials, exclude flies, reduce smells and balance Carbon:Nitrogen ratios. When full the bucket is removed and emptied onto a composting pile that is kept separate from other composting materials such as kitchen or garden waste.

Some composting toilets use electricity, while others do not. Some electrical systems use fans to exhaust air and increase microbial activity. Other systems require the user to rotate a composting drum or otherwise stir the composting humanure from time to time.

Some composting toilets are large with a significant space requirement in the room below the toilet. Others are not significantly larger than a traditional toilet. Those small systems generally do not claim to finish the composting on-site, but are preparing the human waste materials for secondary composting in another location (like a compost pile).

All composting toilets eventually need some end product removal. A full size composting toilet does not need to have solids removed for several decades if the active tank volume is at least three times the yearly addition. This is due to the dramatic reduction in volume over time -- after around 5 years only 1-2% of the original volume remains. It is then a mineralized soil which will not decompose any further See [3] Other smaller type systems need to remove solids several times a year.

In recent years several commercial compost toilet systems have begun to compete with and replace conventional WCs in high use public facilities. There they have found a market because of their resilience and the environmental advantages of not discharging pollutants into the environment. Composting toilets reduce the volume of humanure and other organic materials on site over months or years through predominantly mesophilic composting and yield a fertilizer that is, after the legally required period of time, able to be utilized in horticultural or agricultural applications. Composting toilets are also becoming more common as an accepted alternative in homes, where the odor-free operation of a properly functioning unit appeals more to some houseowners than conventional toilets, with their consumption of large quantities of clean water.

Composting toilets have entered the mainstream plumbing realm by being tested and, if approved, labelled by the internationally acclaimed NSF - a testing facility for all types of water and sanitation products. Composting toilets have their own testing standard called Standard-41. Standard-41 can also be tested and awarded by other recognized testing laboratories such as CSA or UL.

Waterless, odorless composting toilets insure that houses can remain occupied in drought areas where water is shut off for periods of time. An example is southern Spain, where at least one composting toilet per house could provide acceptable sanitation for as long as the drought prevails and water is unavailable. Likewise it provides always-usable public toilet facilities under such circumstances. This is becoming a very important application for the technology in areas all over the world where there is only periodic availability of water.

Far more simple and basic DIY systems can also be constructed that require very little cost or maintenance, provided that attention is paid to a number of important factors. The toilet must control odours. This is achieved by ensuring adequate ventilation (sometimes simply by leaving a small gap between the top of the wall and the roof, more sophisticated systems may incorporate some kind of low voltage extractor fan). Odours can also be controlled by either ensuring that urine and faeces are kept separate or by adding sufficient high carbon content 'soak' material (see below) to absorb excess liquid. The design of the composting toilet should allow the material to remain aerated to prevent the compost from becoming anaerobic, which can result in unpleasant odours. It must also either heat the faeces to the point that pathogens are destroyed (a thermophilic process), or else allow sufficient time (up to a year) for such pathogens to break down and disappear naturally (a mesophillic process). The upside however is that they do not use any significant amount of water and they may produce fertilizer safe for small scale agricultural use.

Another variant is the Tree bog- a type of compost toilet which never needs emptying. Nutrient hungry trees such as fast growing willows are planted around the Tree bog which take up the nutrients converting them to biomass which may then be harvested.

The process of converting human excrement into safe and usable compost material can take between 3 months to a few years depending on factors such as climate, temperature and the particular system being employed; and in 4-6 years will become highly mineralized soil. Some composting toilet models are concomitantly turning urine into an odor-free, pathogen-free organic liquid fertilizer. Some countries, for example Sweden, allow this liquid to be used in agriculture after a storage period of 6 months. In the full size composting toilets, urine is going through a process called nitrification, resulting in an odor free and practically bacteria free liquid fertilizer.

Urine, rather than faeces, contains the major bulk of plant nutrients worth recovering for reuse, including 90% of the nitrogen and 70% of the phosphorous. One advantage of modern composting toilets over conventional outhouses is that the latter leached most nutrients into the groundwater, instead of saving them to be reused in agriculture or spread on the land.

Human faeces can be hazardous to come in contact with when improperly or incompletely composted, because it can contain bacteria and other pathogens associated with human disease. For this reason, human waste should not be used as fertilizer without ensuring that it is composted thoroughly. The Centre for Alternative Technology (CAT) in Wales recommends that humanure should be allowed to break down for at least one year in a cool temperate climate such as that experienced in the UK, where true thermophilic decomposition cannot be guaranteed. They also advise that humanure should not be used as a fertiliser on crops that are directly handled and eaten, such as vegetables or salad leaves, but instead applied as a mulch around bush or tree fruits. Joseph Jenkins, author of The Humanure Handbook and proponent of humanure composting, recommends using composted humanure on any and all agricultural products.

Many in the 'developed world' find the idea of a composting toilet to be unappealing, perhaps due to the health and hygiene issues raised above. However, as long as basic safety rules and common sense are used, the real risks associated with a composting toilet system should be no more significant than any other situation where there may be some level of fecal contamination (eg, using a WC style toilet, changing babies nappies, taking a bath, etc). Educating people about the safe use of composting toilets is an important part of their gaining acceptance in the use of developed world. It may also be worth noting that water based toilets were originally viewed with the same type of suspicions when they replaced the chamber pot.

Properly designed and sized in relation to use, composting toilets neither need power for processing nor use water and will eventually reduce the solids to a final 1-2% of the added organic materials (faeces and toilet paper). True composting is a slow process and takes around 4-6 years and a variety of processes involving bacteria, fungi, worms and other micro and macro-organisms.

Ecologically, in the case of some of the more complex smaller systems it may be that the use of electricity should be weighed against the use of water within the context of a situation. In arid areas, water is probably more valuable than electricity while in wet areas, the opposite may be the case.