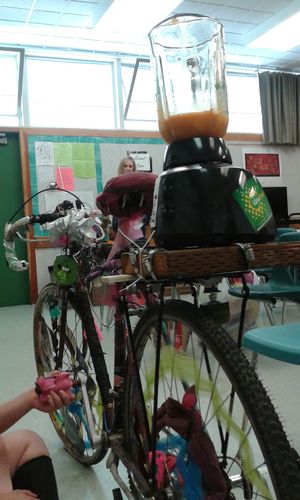 If you are searching for examples of DIY bike blenders made by Appropedia users, check out the projects section.Appropedia 사용자가 만든 DIY 바이크 블렌더의 예를 찾고 있다면 프로젝트 섹션을 확인하십시오.

In physics, a calorie is the amount of heat required to raise one kilogram of water by one degree centigrade. In nutrition, a Calorie is 1000x the physics calorie, also known as a kilocalorie, however it is still referred to as a "calorie". When people eat food that contains Calories, they store these calories for later use, such as pedaling a bicycle or stationary bike blender. It is when they pedal a bike that they convert the stored calories into heat and work.[1]

A person pedaling a bicycle can accelerate to a speed and maintain it comfortably for a long period of time. This is referred to as "pacing." Beyond this point, a riders' velocity may reach high speeds, however the amount of energy required to keep up rapidly increased to a point where all energy from the rider is used up. This is because the amount of energy needed to keep the RPM's (rotations per minute) of the crankshaft up has exceeded the amount of energy the rider can actually produce and expend. These points vary according to each rider's skill and athletic condition.[2]

This design is where the fly wheel of an exercise bike turns a skateboard wheel attached to a drive shaft. This drive shaft directly attaches to the fitting of the pitcher component of a blender. The blender is stabilized with counter like table top mounted in front of the bike. An advantage of this bike is that there are no electrical components involved! This design is purely mechanical which can also be a draw back because of the rarity of parts. Some parts for this design had to be specially designed and fabricated at a machine shop, which can be costly. Also, the parts used for this bike are not weather proof and are subject to rust. The whole design is also somewhat heavy, requiring at least two people to move.[4]

This design also modifies an exercise bike by connecting the flywheel to an electric generator with a fan belt. The generator operates at very low RPM's allowing the rider to power it with ease. An advantage with this generator is that any appliance working off of DC current can be operated not just a blender. A disadvantage is that the generator adds extra weight to the bike. Also, the wiring of the generator must be maintained to insure that the bike operates safely. This design is also not weatherproof.[5]

This design involves a stand that attaches to an ordinary bike in a way that elevates the rear wheel off the ground. Once the stand is in place and the rear wheel is elevated, a rider can power the blender by pedaling. An advantage to this design is that the stand and blender are separate from the bike, allowing any bike to be a possible bike blender. The disadvantage is the possible loss in efficiency by not having a stand and blender custom fit for a particular bike.[6]

According to ergometer tests conducted by Grosse-Lordemann and Muller, max power output for a 34 year old male who is not an athlete is about 110 watts at 80 rpm and 160 watts at 40 or 50 rpms sustained for 10 minutes.[7] A test conducted by students at Dartmouth College found that for an untrained average adult male, an output of 37 watts can be sustained for an indefinite period of time at 65 rpm, and an output of 71 watts can be sustained for 60 to 120 seconds at 90 rpm.[7][8] Another study found that peak average output of subjects was 142 watts for periods of more than 60 minutes.[7][9] In a study done on professional cyclists [7],[10] and on estimates made from UCI record holders[11], professional athletes can generate more than 400 watts for periods of at least an hour or more. In a related experiment, Renzo Sarti, an Italian sprinter, was able to produce 1,644 watts for 5 seconds.[12] Variations in power output are likely due to the ability of the test subject and testing conditions, such as the equipment, quality of bike fit, and riding posture.

Cadence on a bicycle refers to the number of rotations per minute of the crank. Cadence is related to power output because power output is a function of force applied to the pedals and cadence, this relationship being: Power (watts) = Pedaling speed (m/sec) * Thrust force (newtons). Cadence can't be directly related to power output, as different crank arm lengths will yield different pedaling speeds for a given rpm. According to a study done on trained bicycle racers by Coast, Cox, and Welch, optimal efficient pedal rate over a 20 to 30 minute period is between 60 and 80 rpm. At 80 rpm, perceived exertion and lactate levels were lowest.[12] [13]

The seat can be adjusted by loosening a clamp bolt with a crescent wrench. There is also another bolt for adjusting the tilt of the seat. These two points may become weak with more riders of varying sizes and should be inspected and replaced when necessary. It is suggested that at least 2 ½ inches of the seat post are should remain in the seat tube at all times. For taller riders, it is possible that this recommendation will not be followed and possible breakage of the seat or seat post could result. This recommendation should always be followed to prevent this.[14] 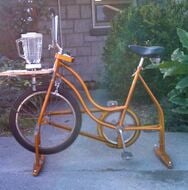 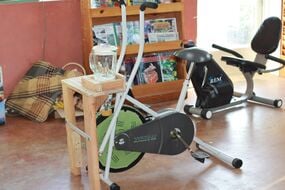 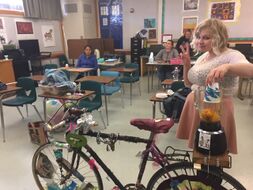 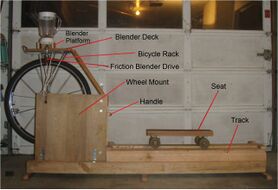 Page data페이지 데이터
Retrieved from "https://www.appropedia.org/w/index.php?title=Bike_blender/ko&oldid=669646"
Cookies help us deliver our services. By using our services, you agree to our use of cookies.
Category:
About Appropedia · Policies · Contact · Content is available under CC-BY-SA-4.0 unless otherwise noted.