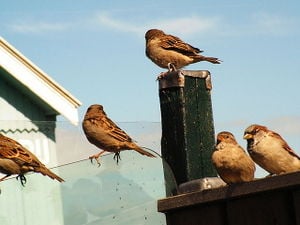 Royal Society for the Protection of Birds organises bird record data collection in annual collective birdwatching days in Britain. RSPB claims this is the "world's biggest wildlife survey" and helps that society to get a better knowledge on bird population trends in Britain. That activity was launched in 1979 as an activity for kids, although from 2001 is a survey open to adults too. In 2011 over 600,000 people took part, being only 37% RSPB's members. The usual date for this birdwatching collective activity is the January's last weekend. From the start of this annual survey records for sparrows show a decline of 60%, while starling population's decline is about 80% from 1979 to 2012. W