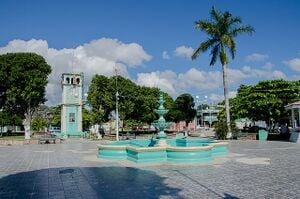 Belize ( (listen)) is a Caribbean country on the northeastern coast of Central America. It borders Mexico to the north, the Caribbean Sea to the east, and Guatemala to the west and south. It has an area of 22,970 square kilometres (8,867 sq mi) and a population of 419,199 (2020). Its mainland is about 290 km (180 mi) long and 110 km (68 mi) wide. It is the least populated and least densely populated country in Central America. Its population growth rate of 1.87% per year (2018 estimate) is the second-highest in the region and one of the highest in the Western Hemisphere. Its capital is Belmopan, and its largest city is the namesake city of Belize City.

From Wikipedia:Belize § Environment preservation and biodiversity

Belize has a rich variety of wildlife because of its position between North and South America and a wide range of climates and habitats for plant and animal life. Belize's low human population and approximately 22,970 square kilometres (8,867 sq mi) of undistributed land make for an ideal home for the more than 5,000 species of plants and hundreds of species of animals, including armadillos, snakes, and monkeys.

The Cockscomb Basin Wildlife Sanctuary is a nature reserve in south-central Belize established to protect the forests, fauna, and watersheds of an approximately 400 km2 (150 sq mi) area of the eastern slopes of the Maya Mountains. The reserve was founded in 1990 as the first wilderness sanctuary for the jaguar and is regarded by one author as the premier site for jaguar preservation in the world.

Belize is also a leader in protecting biodiversity and natural resources. According to the World Database on Protected Areas, 37% of Belize's land territory falls under some form of official protection, giving Belize one of the most extensive systems of terrestrial protected areas in the Americas. W

As a country with a relatively high forest cover and a low deforestation rate, Belize has significant potential for participation in initiatives such as REDD. Significantly, the SERVIR study on Belize's deforestation was also recognized by the Group on Earth Observations (GEO), of which Belize is a member nation. W

Belize became the first country in the world to completely ban bottom trawling in December 2010. In December 2015, Belize banned offshore oil drilling within 1 km (0.6 mi) of the Barrier Reef.

Despite these protective measures, the reef remains under threat from oceanic pollution as well as uncontrolled tourism, shipping, and fishing. Other threats include hurricanes, along with global warming and the resulting increase in ocean temperatures, which causes coral bleaching. It is claimed by scientists that over 40% of Belize's coral reef has been damaged since 1998. W

Since March 2010, the organisation has been running volunteer expeditions to Belize to conduct scientific research and educational outreach programmes. The volunteer programme in Belize is located on the Belize Barrier Reef, which is a UNESCO World Heritage Site.

The organisation conducts ecological monitoring within the Bacalar Chico Marine Reserve in order to advise the Belize Fisheries Department on management effectiveness. Much of the work in Belize is focused on tackling the invasive red lionfish (Pterois volitans) population, including creating a market to drive the targeted removal of the lionfish, developing alternative sources of income such as lionfish fin jewellery and ecotourism trips to survey and hunt lionfish. Focusing on the economic interests of local fishers has led to much more ambitious fisheries management and in 2017 Blue Ventures led the development of a national lionfish management plan in collaboration with the Belize Government.

It also carries out community education, alternative livelihood development and outreach activities in Sarteneja, Corozal District, the largest fishing village in Belize. These include fishery-based management, a successful collaboration with the Sarteneja Homestay Group and supporting Belioness Lionfish Jewelry

Also, in compliance with the United Nations' program REDD, Reduction of Emissions from Deforestation and forest Degradation, a national workshop performing with the Ministry of Natural Resources and Environment and the Forest Department of Belize are coordinating efforts to forest management and reduction of deforestation (Protecting Belize and other Central American Countries – Reducing Emissions: REDD, 2010). Along with signing the San Jose Pact, Belize has also been a participant to the Kyoto Protocol. W 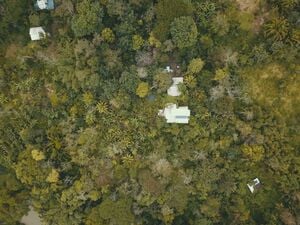 A view of a section of the agroforestry system at MMRF.

Originally a citrus and cattle farm in 1988, it has been regenerated using agroforestry techniques and permaculture principles into a very complex agroforestry system. The farm is located in San Pedro Columbia, Toledo District, in southern Belize. works with local communities, NGOs and interns from abroad. It is Belize's most well established permaculture project.

In 2019, the farm was presented The Commonwealth Secretary General's Innovation for Sustainable Development Award in London, and continues to be active with the Commonwealth.

The urls of the site is http://mmrfbz.org/