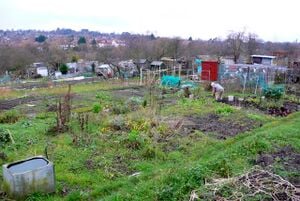 Allotments near Totteridge These allotments are at the northern end of Holden Rd close to the road bridge over the Northern line. The small stream of Dollis Brook runs through the allotments. December 2008. Attribution: Nigel Mykura

Barnet Pledges, an initiative of the London Borough of Barnet (local council, barnet.gov.uk)

It was set up in 1991 and is one of twelve community forests in England set up to regenerate the countryside in and around urban areas. They are sponsored by Natural England and the Forestry Commission which work with local authorities and voluntary bodies to manage them. W

Sisters are doing it for themselves: the retired women who built their own community, May 31 [1]