Back Yard and Commercial Rabbit Production/9

As with any animal, the way you feed a rabbit depends on what you want to do with it and on what you have available to feed it. For example: the 18-year old farmboy working from dawn to dusk in the ricefield will eat tons of fish, rice, and vegetables while the relatively more sedentary office worker will consume much less meat and rice because he expends less physical energy.

So, as you have rabbits in different stages of development and doing different kinds of things, you feed them differently. Rabbits are generally divided into 4 classes based on their dietary needs. They are: (a) growing and fattening rabbits; (b) resting (non-pregnant and non-lactating) does and bucks; (c) pregnant does and (d) lactating does with litters. Each of these classes should be fed a different ration in varied The "should be" is based on the assumption that you want the rabbits in each of these classes to perform to the best of their abilities (i.e. you wouldn't feed a lactating doe the same moderate amounts of a carbohydrate-rich food that you would feed a mature truck, because you want the lactating doe to produce as much high quality-protein rich milk for her young as possible while you only want the buck to maintain his weight).

The "should be's'' of rabbit feeding can be expressed in the form of specific numerical nutrient levels (i.e. crude protein and TON*), and daily amounts of feed, as shown in Table 2. These "should be's" are requirements if you agree that you want certain things such as at least 8 bunnies per litter; at least 32 grams per day of average daily weight gain for growing, fattening rabbits; a small incidence of reproductive failure; etc. These conditions represent what a good commercial rabbit raiser would like to see on his farm.

Some of you will likely be running a commercial sized rabbitry (say 50 or more does), so we will use the following feeding guidelines (nutrient requirements) for our purpose. In this way we will minimize as much as possible the chances of failure in the rabbitry project due to poor nutrition.

If we simplify these requirements, we come up with a feeding program that looks like this:

1. Feed as much fresh grasses and/or legumes as the rabbits want each day; up to 85 per cent grass.
2. Feed a commercial feed of at least 16 per cent crude protein at the following levels:

It is important that you follow a feeding regime using significant amounts of concentrate feeds for two reasons: (a) since this is a pilot-demonstration project, you want to minimize your chances of failure, and (b) since the offspring of these rabbits are intended for use as breeding stock, you want to produce young that are as healthy and vigorous as possible. If you cut down the amount of concentrates or unbalance the diet, the first thing you'll notice is a lowered reproductive performance followed by a slower growth rate of the young produced. An insufficient or unbalanced diet, therefore, cannot he justified for an animal used or intended for breeding and for meat purposes since the cost of a single reproductive failure or of a greatly reduced litter size is much greater than the savings in reduced feed, whether or not you consider the investment of your labor, your infrastructure (i.e. hutches) and breeding stock of any value at all.

Other general considerations for feeding rabbits should he made as follows:

In the Philippines, a variety of commercial mash and pellet feeds can be found. The ones best suited for rabbits are:

These have generally at least 16 per cent crude protein and supple enough energy to meet the needs of a rabbit at the feeding levels suggested in the simplified feeding regime above.

In the States, what is fed as a pelleted ration for rabbits is a feed that contains about 5() per cent alfalfa hay, a leguminous roughage.

In the Philippines, the available commercial pellets or mashes are not formulated for rabbits but for hogs, pigeons, chickens, etc. - animals that cannot utilize roughage the way rabbits can. Thus, commercial feeds in the Philippines are made almost entirely of concentrates (grains or grain byproducts) so you can feed less of them to your rabbits than the USNRC recommended daily levels if you also supply them with plenty of grasses and/or legumes. You can reduce the amount of concentrate feeds since the forages you supply do not have the same nutrient value (due to their lower digestibility, and large amounts of water) as the dehydrated alfalfa used in U.S. pellets.

Pellets are preferable to mashes because the rabbits waste less (they cants snuff and paw them out of the crocks as easily) and they are not dusty and so will not irritate the nose and lungs. If you must use a mash, you can avoid the crustiness and reduce some waste by adding just enough water to slightly moisten the feed. But beware of giving to much moistened feed to the rabbit or leaving it in the pen too long as it will sour and the rabbit will not eat it causing further waste. In the low lands where fermentation is more prevalent, give the rabbits only enough concentrates to be consumed within a 10-15 minute time span. For example, in a large herd, a kilo of feed wasted daily is a substantial economic loss over a year's time.

There are a number of ways of preparing and feeding home mixed rations to rabbits which you may want to try after you've raised rabbits for a while with success, so that you know what your variables are when you begin to experiment with the feeds.

In general, rabbits can be fed almost any food that is not sour, spoiled, or greasy. A few exceptions are meat, potatoes and/or potato peelings and large amounts of cabbage. Thus the rabbit's diet may he supplemented with many things, including vegetable trimmings, fruit peelings, bread crusts and sun-dried leftover rice and leftover milk.

One may mix his Own concentrate feed if suitable ingredients are available. One example of a home-mixed concentrate ration is:

Fish meal in this ration should be reliable, fresh, and of good quality or else use meat and bone meal. For breeders, raise the soybean meal to 60 g. and drop the copra to 150 kg. It would be better to utilize alfalfa (Leucerne) instead of ipil-ipil if it is available. If by necessity ipil-ipil is used, the Peruvian variety is less toxic.

The ideal is to feed the rabbit both commercial feed and greens as the rabbit should eat 85 per cent forage of good quality and quantity. In case the commercial concentrates or home-mixed ingredients are not available, green feeding composed of 50 per cent legumes and 50 per cent of other grasses will suffice in providing a minimum dietary requirement especially for dry does and bucks.

As with other sources of feed, a few basic guidelines should be followed with forages:

a) Green feeds that stand in piles before feeding. They will become heated and cause digestive disorders due to fermentation.
b) Kangkong leaves or stems (they generally carry the parasites found in swampy areas).
c) Forages collected from places where dogs and cats and other animals commonly defecate as this may cause tapeworm and/or coccidiosis.
d) Forages sprayed or recently in contact with insecticides.

a) Salt. Salt should be provided in the feed at a level of 0.5 per cent or provided in the cage in a block or small container at least 1 tsp. in the grain ration once a week or when needed.
b) Water. Clean, fresh water MUST be provided to rabbits at all times. This is important especially in tile tropics where a doe and her litter may consume as much as 2 liters of water a clay.

One last point to mention regarding feeds is whatever you use - a type of mash, an ingredient in a feed, a forage - if you wish to make a change in the rabbit's diet, do it slowly. Serious damage or even death may result if large quantities of lush greens are fed to animals accustomed to concentrated feed only. Even sudden changes in a grain diet may cause minor, or possibly serious, digestive disorders. ANY CHANGE IN FEEDING, SHOULD BE MADE GRADUALLY. The best method is mixed feeding (Â´giving greens and commercial) to avoid any sudden change.

Forages are essential for their roughage and vitamin value in the Philippines where the commercial pellets and mashes consist of only grain concentrates. In addition, forages greatly economize the amount of concentrate fed (Fig. 14). 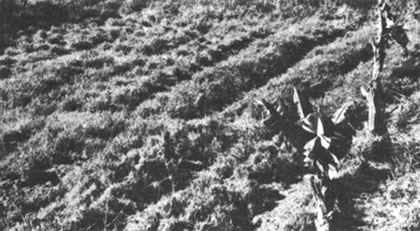 Many kinds of forages as shown on Table III can be fed to rabbits.