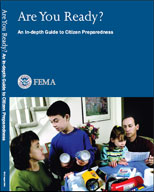 A volcano is a vent through which molten rock escapes to the earth’s surface. When pressure from gases within the molten rock becomes too great, an eruption occurs. Eruptions can be quiet or explosive. There may be lava flows, flattened landscapes, poisonous gases, and flying rock and ash.

Because of their intense heat, lava flows are great fire hazards. Lava flows destroy everything in their path, but most move slowly enough that people can move out of the way.

Fresh volcanic ash, made of pulverized rock, can be abrasive, acidic, gritty, gassy, and odorous. While not immediately dangerous to most adults, the acidic gas and ash can cause lung damage to small infants, to older adults, and to those suffering from severe respiratory illnesses. Volcanic ash also can damage machinery, including engines and electrical equipment. Ash accumulations mixed with water become heavy and can collapse roofs.

Volcanic eruptions can be accompanied by other natural hazards, including earthquakes, mudflows and flash floods, rock falls and landslides, acid rain, fire, and (under special conditions) tsunamis. Active volcanoes in the U.S. are found mainly in Hawaii, Alaska, and the Pacific Northwest.

Before a Volcanic Eruption

During a Volcanic Eruption The following are guidelines for what to do if a volcano erupts in your area:

After a Volcanic Eruption[edit | edit source]

Follow the instructions for recovering from a disaster in Part 5.

Read the scenario and answer the question. Check your responses with the answer key.

Scenario About an hour after the eruption of Mount St. Helens, ash began to fall in Yakima, a city in eastern Washington. The ash fall was so extensive and it became so dark that lights were turned on all day. It took 10 weeks to haul away the ash from Yakima’s streets, sidewalks, and roofs. Assume you were a resident of Yakima during this time. What would you need to protect yourself when going outside?