From Appropedia
Redirected from Alabama 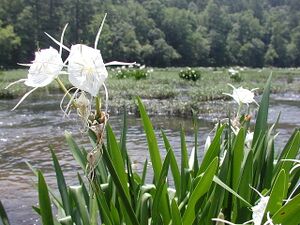 Alabama () is a state in the Southeastern region of the United States, bordered by Tennessee to the north; Georgia to the east; Florida and the Gulf of Mexico to the south; and Mississippi to the west. Alabama is the 30th largest by area and the 24th-most populous of the U.S. states. With a total of 1,500 miles (2,400 km) of inland waterways, Alabama has among the most of any state.

Alabama is nicknamed the Yellowhammer State, after the state bird. Alabama is also known as the "Heart of Dixie" and the "Cotton State". The state tree is the longleaf pine, and the state flower is the camellia. Alabama's capital is Montgomery, and its largest city by population and area is Huntsville. Its oldest city is Mobile, founded by French colonists in 1702 as the capital of French Louisiana. Greater Birmingham is Alabama's largest metropolitan area and its economic center.

Originally home to many native tribes, present-day Alabama was a Spanish territory beginning in the sixteenth century until the French acquired it in the early eighteenth century. The British won the territory in 1763 until losing it in the American Revolutionary War. Spain held Mobile as part of Spanish West Florida until 1813. In December 1819, Alabama was recognized as a state. During the antebellum period, Alabama was a major producer of cotton, and widely used African American slave labor. In 1861, the state seceded from the United States to become part of the Confederate States of America, with Montgomery acting as its first capital, and rejoined the Union in 1868. Following the American Civil War, Alabama would suffer decades of economic hardship, in part due to agriculture and a few cash crops being the main driver of the states economy. Similar to other former slave states, Alabamian legislators employed Jim Crow laws which disenfranchised and discriminated against African Americans and also Alabama's French Creole population from the late 19th century up until the 1960s.

In the early 20th century, despite the growth of major industries and urban centers, white rural interests dominated the state legislature through the mid-20th century. During this time, urban interests and African Americans were markedly under-represented. High-profile events such as the Selma to Montgomery march made the state a major focal point of the civil rights movement in the 1950s and 1960s. During and after World War II, Alabama grew as the state's economy diversified with new industries. NASA's Marshall Space Flight Center in Huntsville would help Alabama's economic growth in the mid-to-late 20th century, by developing an aerospace industry. Alabama's economy in the 21st century is based on automotive, finance, tourism, manufacturing, aerospace, mineral extraction, healthcare, education, retail, and technology.

Energy Data & Statistics for Alabama from the U.S. Department of Energy

Page data
Retrieved from "https://www.appropedia.org/w/index.php?title=Alabama_community_action&oldid=667936"
Cookies help us deliver our services. By using our services, you agree to our use of cookies.
Categories:
About Appropedia · Policies · Contact · Content is available under CC-BY-SA-4.0 unless otherwise noted.