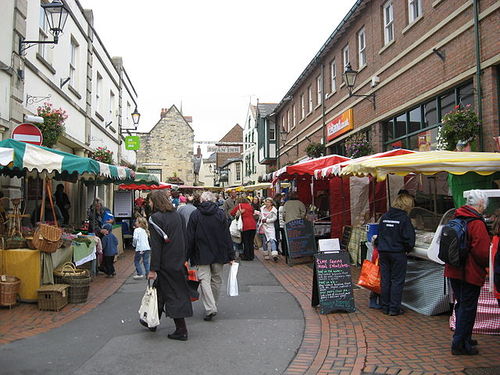 ‘Healthy food should be produced in a sustainable way by a supply chain comprised of fair trading relationships conducted in good faith and from which all parties have the freedom to walk away. Given the profitability of selling food, the power of the largest manufacturing and retail companies, and the extent to which a lot of agricultural labour is located overseas, it seems unlikely that such a vision will be achievable without radical changes in the sector and the law.’

‘As a wholesaler, we despair at the amount of food we import and the lack of co-ordinated help to identify resilient supply chains at a local level and to join the dots between what is grown here and where it is sold.’

‘In Hackney, where we’re based, you can buy organic food from a dozen retailers within half a mile. Dagenham, where we have our second farm, just 10 miles away, is a food desert, with no fresh food available at all in the half mile between the tube station and the farm.’

‘We need to make the food distribution chain shorter and the links in that chain more closely connected. By doing so, growers and farmers will retain more of the financial value of their food. The stakeholders in the chain will more easily build collaborative, supportive, trusting and mutually beneficial relationships, so that the chain works effectively in the long-term for everyone involved. It will enable people to eat food that is grown/reared/produced near to where they live, building strong local food economies that are more resilient to environmental and political changes.’

‘Supermarkets are driving down the prices paid to farmers and distorting understanding of the real costs of producing food. We need better ways of ensuring fair prices for farmers so that they are not so much at the mercy of supermarkets. We cannot continue to expect rock bottom prices for food. If we expect unprocessed food to be cheap, this will mean selecting imports from countries with lower rates of pay rather than locally produced food.’

Our vision is of a future in which there are a diverse range of places where food can be purchased, including farmers’ markets, community supported agriculture schemes, online distribution networks, and independent and community retail outlets. These markets provide nutritious, delicious and affordable food for everyone, support decent livelihoods for all workers and ensure that people earn a fair reward for their labour and products.

In this future, the power of supermarkets has been significantly curtailed. Short supply chains and local markets are acknowledged as public services, and accordingly protected by law. Public procurement contracts have been reoriented to prioritise sourcing food from agroecological farmers and food producers.

International trade is still part of the global food system, but food is no longer just another commodity that can be speculated on in the global market. Instead, food markets and trade have been reoriented in England /253 and internationally /254 to support domestic markets where possible, which are recognised as a priority for food security.

Producers across the globe are farming and processing products in an environmentally and socially sustainable way and are able to earn a fair reward for their labour and from good food production.

Our markets now enrich local economies, protect farmers and farming landscapes and everybody is able to eat fresh, healthy, seasonal produce affordably, all year round.

Over the past few decades there been a major consolidation of production, manufacturing and retail enterprises across the food supply chain. A rich diversity of independent shops, small farms and craft producers have faded out of existence. Today, the UK grocery market is worth £180 billion, and is highly concentrated, with eight supermarkets holding a 93% market share of food retailing. /255 58% of food is bought from supermarkets or hypermarkets, 21% from convenience stores, 16% from discounters or online, and 6% from other retailers. In food manufacturing, 6% of enterprises are responsible for 76% of turnover. /256 In the past 60 years 100,000 specialist food stores have closed across the UK. /257

This concentration of the market has resulted in disproportionate power lying in the hands of specific industry buyers. Supermarkets, for example, have been found to breach contracts with suppliers, leaving them powerless. /258 The promotion of loss-leading products, such as milk, have in turn distorted public understanding of the true costs of food production. The era of ‘cheap food’, and the driving down of shop prices by a supermarket monopoly consistently sees food producers’ livelihoods and businesses becoming precarious, with dairy farmers and milk producers already being forced to sell milk under the cost of production. In the past five years, the number of food production companies going into insolvency has trebled, with 162 closing in 2015. /259 Large buyers with the resources to acquire more detailed sectoral knowledge have been able to use this knowledge to dictate prices and concentrate market dominance.

The UK government has provided little protection for small businesses in the food supply chain, despite the sector creating 13.5% of national employment. Under CAP, subsidies are based on the size of landholding and require compliance with environmental practices. This model of subsidies has buffered UK agriculture from the free market, but market pressures have resulted in a trend toward farming that minimises labour per unit area.

In 2016, on average over all farms, agricultural businesses ran at a loss. /260 Subsidies received through the Basic Payment Scheme (CAP pillar 1) and agri-environment and diversification schemes accounted for over 50% of all farm income, and often served to recover losses incurred from agricultural production itself. /261 The subsidy has effectively protected farmers from consistently falling farm gate prices, with producers currently receiving only 9% – less than 10p per pound – of the value of their produce sold. /262

The rising concentration of the food supply chain has negatively affected consumers as well. This increase in food superstores has been found as a contributing factor toward the rise in ‘food deserts’. Even the growing number of local food distribution networks are almost exclusively found in affluent areas of the country. /264 There is an irony here, as spending in local food outlets generates 10 times the local economic wealth [1] and three times the number of people in employment /265 for each £1 of turnover compared with spending in supermarkets. However, while local food distribution networks are growing, they are not keeping pace with the expansion of supermarkets. ALDI has announced its plan to build 400 more stores (to add to their existing 600) across the UK in the next five years, whilst LIDL plans to open 280 new stores in London alone. /266

The UK is a net importer of food products, totalling £39.6bn in 2014. /267 We import nearly twice as many food products from the other EU countries than we export, however our exports are significant. In 2014, we exported £12.8bn worth of products. /268

As a net food importing nation, the UK government must develop progressive trade policies that support the realisation of food sovereignty in countries around the world. In countries where farmers produce food for an export market, too much of the farming system has been orientated to produce and supply cash crops like coffee and sugar and non-traditional export crops such as high value horticulture, guided by years of International Monetary Fund (IMF) structural adjustment policies.

When participating in international trade negotiations the UK has a responsibility to minimise the exploitation of people’s livelihoods, lands, economies and communities around the world and repair our colonial legacy by respecting and supporting the food sovereignty of other nations. This is particularly pertinent during post-Brexit trade negotiations.

As the UK negotiates its departure from the EU, new trading partnerships and agreements will be formed with countries around the world. In addition to renegotiating the role of agriculture in the World Trade Organisation (WTO), any post-Brexit bilateral or plurilateral trade deals (including a potential UK-US deal) must ensure that the role of agriculture is protected. Food is currently traded as a commodity in speculative financial markets and this must be curbed. With hundreds of millions of people malnourished in a world with enough food to feed everybody, agriculture must not be used as a bargaining chip in global trade deals. As agricultural trade rules are negotiated, the special nature of agriculture needs to be taken into full consideration. 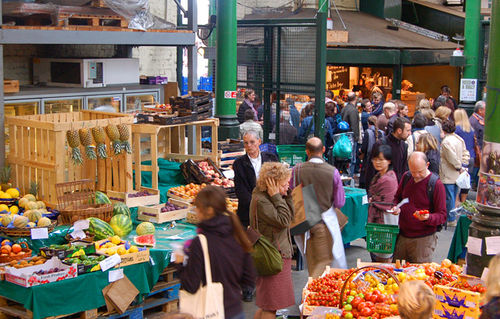 8.2.1 Extend the remit of the Grocery Code Adjudicator to enforce fair trading practices across the whole supermarket supply chain, including indirect suppliers and producers.

8.2.3 Facilitate co-ordination of local production and distribution through training, advisory services, and finance. Producer, marketing, processing and distribution collectives must be supported to network and collaborate to achieve economies of scale.

8.2.4 Supermarket developments must be subjected to rigorous assessment including community consultations, social and economic impact assessment and adherence to the National Planning Policy Framework (NPPF) on retail diversity and town individuality, support for markets and protection of fertile land. /269

8.3.1 Local abattoirs and humane slaughter facilities must be prioritised and reintroduced around the country. Fewer abattoirs means further distances and longer travel times for farmers to bring their animals to slaughter. Local facilities would create more local employment, smaller distances for livestock to travel and increase the capacity of short supply chains.

8.3.2 Food hygiene regulation standards must be made appropriate to the scale and type of processing. Promote rigorous protection of food safety through effective risk assessment leading to control systems that are appropriate for different scales, contexts and modes of production and marketing, while providing information and capacity building to meet these requirements. /270

8.3.3 The government and local authorities should create a fund available for producers and processors to invest in and improve processing and storage equipment and facilities. This would enhance availability, quality, nutritional value and food safety throughout the seasons and the ‘hungry gap’. /271 [2]

8.4.1 Governmental, non-governmental and public bodies should provide strong leadership on sustainable food procurement by setting challenging long-term targets for food procurement, including for schools and hospitals, and enforcing these targets. [3]

8.4.2 Establish policy and institutional arrangements, including innovative partnerships, that empower food producers and providers to have an effective and equitable role in the design and implementation of contractual arrangements. /272

8.5.1 Develop financial regulation that safeguards consumers and producers against speculation-driven volatility in food prices. There must be stringent regulation of the agricultural futures commodity markets to ensure that price stability domestically and internationally is not undermined.

8.5.2 Utilise available trade policy instruments, including tariffs and quotas, to protect producers from cheap imports that undercut food produced locally and seasonally. Sensitive agricultural products should be identified, with consideration to (among other factors) health and nutrition. The full flexibility of trade policy mechanisms, including tariffs and quotas, should then be used to support public policy aims, particularly regarding: food security; health; nutrition; environment; climate; rural development; employment; and local economic development.