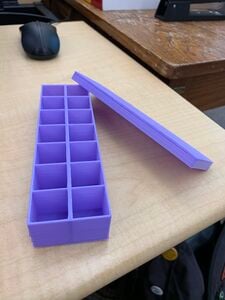 I created a pill holder to hold daily pills for up to 14 days that a professor at Penn State University requested. This is my final project. I initially had a different idea for the lid that would be more efficient and prevent pills from flying everywhere if the dispenser was to be knocked over, but my idea didn't work out, unfortunately. The plan was to have separate slide-in lids, but they wouldn't hold properly. Therefore I went with a standard lid. This is an appropriate print because it saves the user about 60% of the cost.

It is not super complicated to design, but it does require basic designing understanding in FreeCAD.

These pill holders are usually pretty cheap, the closest one to this that I found at $6 apiece [1], but you don't really find pill holders for more than a week, so that's where this design has a leg up to commercially sold pill holders.

My pill holder has a production cost of roughly $2.5 (65 grams total at roughly 4ct/gram), so you save roughly 60% of the cost.

The file can be downloaded here [2]